If an app you want to access is being blocked by macOS’s security measures, here’s how to bypass them and open all apps.

Apple had us believe that having control over the apps we can install protects us from malware. But it can be irritating when you try to run an app and get a warning that it is from an unknown developer.

Fortunately, these apps can be opened and run, and we’ll show you how.

But be warned: only do so if you are confident that the developer and software (as well as the means of distribution, since innocent apps can be hijacked by criminals) are legitimate.

The security of unidentified apps is discussed later in this article.

Read More: How to Take a Screenshot on Mac

What is the error "can't be opened because it is from an unidentified developer"? 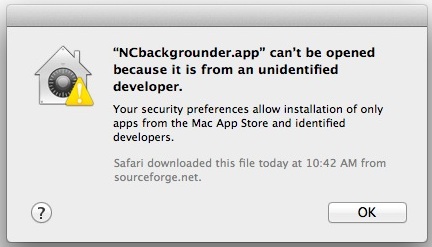 Why am I getting an unidentified developer warning?

Apple controls which apps are available for Macs, iPads, and iPhones. While the Mac is more open than iOS – third-party apps must be downloaded from the iOS App Store if you want them on your iPhone or iPad.

However, there is still a lot of struggle before you can install and run some third-party apps on your Mac.

Apple has a feature called Gatekeeper, which is Apple’s name for the security feature of macOS that scans apps for malware and quarantines them.

It further checks if the app was created by an Apple-approved developer. The gatekeeper will then ask you to confirm that you want to open the app, even if it meets those requirements.

Apple made Gatekeeper even stricter in macOS Catalina, which was released in October 2019.

Another change is that Gatekeeper will now run its checklist of checks whenever you open an app.

So, how will you get apps from unidentified developers to open? And how do you get rid of the warning that appears every time you open an app?

How to open apps not downloaded from the Mac App Store

You can open some third-party apps that aren’t available on the App Store by making some changes to your settings.

It won’t mean you’ll be able to open every third-party app without problems, but rather you’ll see fewer warnings.

You’ll still be unable to open anything macOS doesn’t recognize.

However, you’ll be able to open apps that weren’t bought from the App Store as long as they don’t contain malware and are signed by an Apple-approved developer.

How to open any blocked app

If you try to open an app and macOS stops you, it indicates that the app isn’t from an ‘identified developer,’ or one who has joined Apple’s developer program and jumped through a few steps to gain Apple’s trust.

Fortunately, you can still open the app and bypass the restriction.

Other methods to open blocked apps

Locating the app in a Finder window is another way to open a blocked app.

How to ‘Allow Apps from Anywhere’ on your Mac

There is, however, a third option: ‘Allow apps from anywhere.’

This was an option in previous versions of macOS, but it was removed when macOS Sierra was released.

You can, however, reclaim the Anywhere option.

We’ll start by saying that we don’t recommend this setting because it puts you at risk of getting malware. If you’re dead set on following this path, you can bring back that option with a line of Terminal code.

Once you’ve pressed Return, you’ll be required to enter your password. After that, go to the Security & Privacy section of System Preferences.

You’ll notice a new third option that says ‘Allow apps downloaded from: Anywhere.’ To make changes to the settings on this page, you must first click the padlock icon.

However, you can remove the ‘Anywhere’ option
by typing this code in terminal:

Is it safe to use unidentified apps?

The answer depends. Since you don’t have Apple’s certification that it is, you’ll have to depend on your own research to make sure the software is safe.

You could perhaps look for app reviews, information about the company, advice  and testimonials from other users before installing the software.

Remember that shady businesses aren’t above displaying a few fake reviews to give themselves the appearance of legitimacy, so look past the first few results.

If you’re not happy, it’s probably safer to look for an alternative that’s easier to install on macOS.

You should also double-check that your anti-virus software is renewed before installing unknown apps.

It’s important to note that receiving the ‘unidentified developer’ warning dialog doesn’t necessarily imply that you’re about to install malware. There are a variety of reasons why a completely legitimate company may not be on the identified list. For example, the app could be older than the company’s developer registration program.

What is an unidentified developer?

Unidentified developers are those who haven’t registered their apps with Apple or gone through the process to get the apps on the App Store. Essentially, if you are trying to install software which is not on the App store, you're likely to get this error.

Why do I get the error cannot be opened because it is from an unidentified developer?

You get the error "cannot be opened because it is from an unidentified developer" becuse apps from developers that are not downloaded from the app store are not considered safe. This is because any app that gets into the App store needs to go through a rigourous verification process, which marks the app as from a "verified developer" and is signed in a way that it is trusted by the Mac OS. Apps that do not go through the process won't have this signature and will get this error.

How do I keep my Mac safe from malware?

The best way to keep your Mac safe from malware is to only install apps from the App Store. But if you want to install more apps, to be safer you can install the CleanMyMac application on your Mac. It scans your Mac for potentially unwanted apps (PUA) and malware. This feature searches your Mac for malicious apps and lets you delete them individually or in bulk.

How can I tell if apps from unidentified developers are safe?